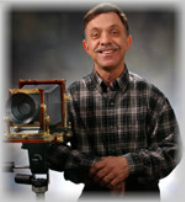 Michael Harker is a documentary photographer whose main goal is to record Iowa’s historically significant architecture from the 1800’s before it disappears forever. His subjects are barns, one-room schools, courthouses, rural churches, banks, and houses from rural areas and small towns. He works in large format black and white, drawing from more than thirty years as a professional photographer. Harker calls his images little time machines carrying forward to future generations of Iowans the dedication of their forbearers, so people born a century from now will be able to look back in time to what was once glorious and real. 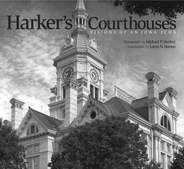 "Harker's Courthouses--Visions of an Iowa Icon" by Michael P. Harker
Michael P. Harker, well-known and popular Iowa documentary photographer, partnered with WDG Publishing to publish the third book in his series of Iowa landmarks, Harker’s Courthouses--Visions of an Iowa Icon. A look at the historic, stately county courthouses of Iowa in beautiful black and white photography, this book highlights significant pre-1940 edifices.

Harker is also known for his successful documentary volumes Harker's Barns and Harker's One-Room Schoolhouses. The book also contains an introductory essay by Loren Horton, who retired as senior historian after twenty-four years of working for the State Historical Society of Iowa.  Paperback, 84 pages. (WDG Publishing, 2009)