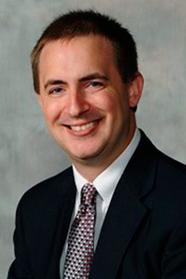 Tim Harwood has worked for the Waterloo Black Hawks as the team’s play-by-play radio broadcaster and director of media relations since 2005. He also is heard weekdays on News/Talk 1540 KXEL, a 50,000-watt radio station based in Waterloo/Cedar Falls/Cedar Rapids, Iowa.

Prior to arriving in Waterloo, Harwood spent two years as a radio journalist in central Iowa. He is a 2002 graduate of Valparaiso University in Indiana, where he studied Communication and Political Science. 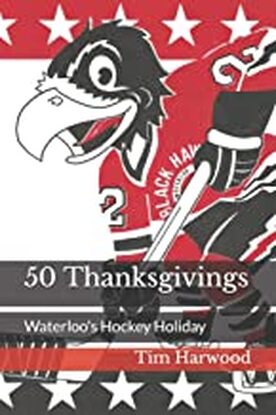 NEW--JUST PUBLISHED!
"50 Thanksgivings: Waterloo's Hockey Holiday" by Tim Harwood
The Waterloo Black Hawks’ first Thanksgiving game was not on the original United States Hockey League schedule in 1964-1965. Nevertheless, the Black Hawks played on that holiday evening, starting a tradition which today draws thousands of eastern Iowans to the rink each November after turkey, mashed potatoes, and pumpkin pie.

The 2019 game between Waterloo and the Cedar Rapids RoughRiders marked the 50th time the Hawks have played on the holiday. The memorable games have been an opportunity for players at all positions to shine in a unique atmosphere. Some – like Joe Pavelski, Brandon Montour, Vinnie Hinostroza, and Cal Petersen – have gone on to remarkable careers in college or the NHL. For others, scoring a goal to start the annual Teddy Bear Toss or making a key Thanksgiving save might be among their most significant hockey memories.

In a commemorative look back, 50 Thanksgivings: Waterloo’s Hockey Holiday revisits each Thanksgiving game, with background information about many of those who starred when the puck dropped and details about some of the other things which were happening in the Cedar Valley as hockey fans headed for the arena. Includes a forward by 2010 Thanksgiving standout Ryan Papa, dozens of photos, and box scores from each matchup.. Paperback, 164 pages. (BTSCP Books, 2020) 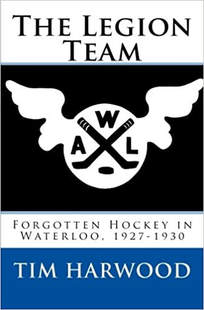 "The Legion Team: Forgotten Hockey in Waterloo" by Tim Harwood
For more than half a century, generations of hockey fans in northeast Iowa have given their allegiance to the Waterloo Black Hawks. Few realize that decades before the Black Hawks arrived, a long forgotten club captivated Waterloo during the late 1920’s, playing in front of crowds even larger than those who come to the rink today and beating teams from Chicago, the Twin Cities, and Canada.

Sponsored and administered by the Becker-Chapman American Legion Post, a contemporary newspaper report noted, “[Hockey’s] popularity eclipses any other winter sport…the game took such a foothold that the city would be lost without its regular hockey matches now.” The Legion Team; Forgotten Hockey in Waterloo, 1927-1930, seeks to revive the memory of this overlooked era, detailing every game the Becker-Chapman squad played during four winters. However, beyond the wins, losses, and game details, the athletes who came to the Cedar Valley for the opportunity to play, their opponents, and Waterloo of that era, come to life. Paperback, 140 pages. (BTSCP Books, 2013) 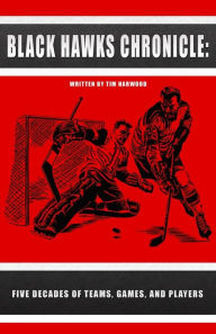 "Black Hawk Chronicles: Five Decades of Teams, Games, and Players" by Tim Harwood Hockey sprang to life in Waterloo, Iowa, when the Black Hawks and the United States Hockey League arrived in 1962. Immediate success on the ice allowed the franchise to put down deep roots. Paul Johnson, Jim Coyle, Bill Dobbyn, and a full cast led the Hawks to five consecutive championships in the 1960s against rival teams featuring players like Herb Brooks, Bill Masterton, and Paul Coppo. The Hawks' early accomplishments built a tradition that helped the sport through many leaner seasons in Waterloo. In more recent years, players like NHL All-Star Jason Blake, U.S. Olympian Joe Pavelski, and Stanley Cup winner Mark Eaton have developed their skills in northeast Iowa.

Black Hawks Chronicle recounts the accomplishments of nearly 50 seasons of hockey in the Cedar Valley. Big wins and tough losses are remembered here. Read about the senior players who brought the game with them and the juniors who thrilled Waterloo fans before going on to star in college and professional hockey. For fans who have followed the team from the beginning, relive the exciting moments, and for those who have only recently discovered the Black Hawks, find out how hockey became the Cedar Valley's proudest tradition. Paperback, 148 pages. (BTSCP Books, 2011)