"Floppy and the Stars"--Duane and Floppy Collection, DVD Volume 2
Featuring the complete episodes of "The Floppy Show" featuring Bill Cosby and Adam "Batman" West,
the special "Thirty Years of Fun" retrospective program, and a never-before-seen stage appearance by
Duane and Floppy from 1966. (total time 80  minutes)
$17.50 -- FREE shipping and handling = $17.50

"Floppy at the Fair"--Duane and Floppy Collection, DVD Volume 4
While Duane & Floppy were well known to central Iowans through their programs on WHO-TV in Des Moines,
thousands more knew them through their appearances at the Iowa State Fair. Includes material recorded
on film in the 1970s and 1980s. (total time 117 minutes--produced in 2014)
$17.50 -- FREE shipping and handling = $17.50 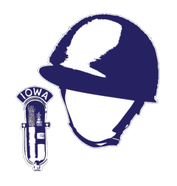 "From the Battlefront to the Homefront: Iowa Broadcasters Go To War" DVD
This award-winning documentary produced by nationally recognized broadcast historian Jeff Stein tells the story of Iowa's broadcast journalists and their efforts to bring the story of the state's fighting men and women back to a waiting audience at home. The program includes original interviews with such noted journalists as Jack Shelley, Dean Borg, Herb Plambeck, Ron Steele, Cary J. Hahn, Geoff Greenwood and more...and includes material that had previously never been seen or heard by audiences. Segments were recorded at the Sullivan Brothers Iowa Veterans Museum in Waterloo, and the Iowa Gold Star Military Museum at Camp Dodge, near Des Moines. (90 minutes running time)

"Jim Zabel--50 Years of Broadcast Memories on WHO Radio" CD
Legendary Iowa broadcaster Jim Zabel was best known for the thousands of sporting events he covered for WHO Radio, but his career included far more than sports. This CD includes not only famous game calls, but interviews with celebrities and politicians, all personally selected by Zabel himself and produced by WHO Radio.

"Jack Shelley: History's Recorder, In His Own Words" DVD
One of America's leading broadcast journalists and educators, Jack Shelley dominated the radio and television airwaves through his daily broadcasts on WHO in Des Moines. He later taught the next generation of broadcast journalists at Iowa State University. This tribute video, produced after Shelley's death in 2010 at age 98, includes a collection of interviews with Shelley as he recounts his amazing career--from covering World War II in both the European and Pacific Theaters, to the Yucca Flat atomic bomb test, to stories of the life and times of Iowans. He was also not shy about offering his opinions on how journalism is being done today. Produced by Iowa broadcast historian Jeff Stein. (75 minutes running time)

"Bill Smith: A Wrestling Legend" DVD
"Bill Smith: A Wrestling Legend" tells the story of the life and career of the oldest living Olympic wrestling champion.
Bill Smith grew up in Council Bluffs, Iowa, and became a wrestling star at Iowa State Teachers College, now the University of Northern Iowa. He was NCAA champion in both 1949 and 1950, and closed out his college career undefeated, missing his senior year of competition due to a fluke in the eligibility system.

Bill also won three AAU national freestyle titles, but the crowning moment came when he captured a gold medal in the 160.5-pound class at the 1952 Olympics in Helsinki, Finland.

​As a coach, Bill led the San Francisco Olympic Club to seven national team titles and also coached high schools in two separate states (California and Illinois) to team titles, one of just three coaches to ever do that.

Joe Stecher Tribute DVD
This video is a tribute to the great Joe Stecher, three-time world heavyweight professional champion in the 1915 to 1930 era. Includes an introduction by Mike Chapman and a very rare brief film clip of Joe wrestling in 1930. Featured is nearly 20 minutes of the match between Joe Stecher and Earl Caddock for the heavyweight championship of the world, held in 1920 in Madison Square Garden, with narration by Mike Chapman. This is the oldest world championship match known to exist on film.

"Lou Thesz: An American Icon" DVD
This 50-minute DVD documentary on the life of professional wrestling legend Lou Thesz includes footage from a David L. Wolper project on Thesz from the 1950s on Thesz. Wolper went on to become one of Hollywood’s top movie producers. The documentary was produced by hall of fame wrestling historian Mike Chapman of Newton, Iowa.