Jeff Stein is a broadcaster and historian. His books and DVDs have earned multiple awards. A native of Toledo, Iowa, Jeff received the Award of Merit from the American Association for State and Local History for his work preserving broadcasting history. He is also a recipient of the Iowa Broadcast News Association's Jack Shelley Award, the highest honor in Iowa broadcast journalism. He taught mass communication at the college level for 25 years and is now heard daily statewide on News/Talk 1540 KXEL. 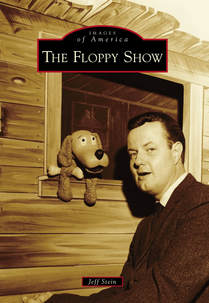 NEW--"The Floppy Show"--by Jeff Stein
In 1957, WHO-TV asked staff performer Duane Ellett to come up with an idea to help teach children how to better care for their pets. Ellett created Floppy, a high-voiced beagle dog puppet that became his sidekick for the next 30 years. Together, the iconic duo made 200 personal appearances every year at community festivals and events. The Floppy Show aired weekday afternoons in part of four decades, featuring a live studio audience of children telling Floppy riddles, beeping his nose for luck, and watching cartoons. On weekends, the duo appeared in a variety of programs over time, from the S.S. Popeye in earlier years to The Floppytown Gazette in the 1980s, featuring Floppy and other puppets Ellett created. Thousands of Iowans outside of Des Moines discovered the duo from their performances at the Iowa State Fair. Even now, 30 years after their last television appearance, Duane and Floppy still hold a warm place in the hearts of baby boomers across America. Author Jeff Stein is recognized as Iowa's leading broadcast historian. He is the author of five books, including three on Iowa broadcasting. Part of Arcadia Publishing's noted "Images of America" series.  Paperback; 183 photos; 128 pages. (Arcadia Publishing, 2018)

"Making Waves--The People and Places of Iowa Broadcasting" by Jeff Stein
It began in 1922 when Col. Bartlett Joshua Palmer purchased a fledgling radio station across the river in Rock Island, Illinois and brought it to Davenport. Commercial broadcasting was born in the state of Iowa. Iowans were already building crystal set receivers in their basements and now the signals they were receiving were actually coming from Iowa. This book chronicles the tremendous impact the medium has had on our lives.

Nationally recognized broadcasting historian Jeff Stein tells the story of the founding of the earliest radio and television stations, with behind-the-scenes details that have never been shared before. The award-winning design combines stories about news and sports broadcasters, disc jockeys, children's shows and more with more than 150 photographs and a CD-ROM of photos and actual audio and video segments from the past. "Making Waves" also features introductory notes from Iowa broadcasting legends Jack Shelley and Grant Price. Hardcover (10x9 inches) with CD-ROM, 186 pages. (WDG Publishing, 2004) 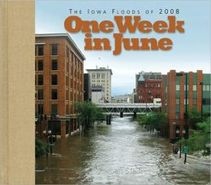 "One Week in June--The Iowa Floods of 2008" by Jeff Stein
From Monday, June 9 through Father’s Day, Sunday, June 15, 2008, the Cedar River swelled and rolled south. At the same time, to the west, the Iowa River was also growing. The two rivers join, in a confluence, just northeast of Columbus Junction and flow on to the Mississippi River. We knew after the winter snows that the potential was there for flooding. No one, however, could anticipate or adequately prepare for what happened.

"One Week in June" was a Barnes & Noble Iowa best seller, and is the only book which tells the story of the whole flood--from Charles City in the north, through Waverly, Waterloo/Cedar Falls, Vinton, Cedar Rapids, Iowa City, and finally to Columbus Junction in the south. "One Week in June" tells the story as it happened, day by day, with more than 200 stunning color photographs. The award-winning design created by WDG Publishing of Cedar Rapids, along with the stories told by lifelong Iowan Jeff Stein, combine to make this book a keepsake of an historic event. Hardcover (10x9 inches), 138 pages. (WDG Publishing, 2009)

SALE: Originally $44.95...due to special arrangement with the publisher--now just $10.00 including sales tax plus $5.00 shipping and handling (USPS Media Mail) - $15.00 total!
Read a review of "One Week in June" from the January/February 2012 issue of Iowa History Journal magazine:

"Iowa's WHO Radio--The Voice of the Middle West" by Jeff Stein
When a Des Moines insurance company started a radio station in 1924, no one imagined it would bring news from a world war home to families desperate for information, carry the exploits of University of Iowa athletics to fans nationwide, draw the ire of a Cuban dictator, and be home to a future president.

From the earliest days of “This is W-H-O. Who? Bankers Life, Des Moines” to today’s “50,000-watt, clear channel voice of the middle west,” one of the most powerful radio stations in America has been part of Iowa life for nearly 90 years. With a signal that reaches “from coast to coast, border to border, and then some,” trusted voices such as Jack Shelley, Herb Plambeck, Jim Zabel, Lee Kline, and Duane Ellett have graced the WHO radio airwaves, while Van & Bonnie, Jan Mickelson, Bob Quinn, and others carry on the tradition today. From the Barn Dance Frolic and Phone Forum to Sportsman’s Notebook and The Big Show, WHO has consistently reflected the values of Iowans.